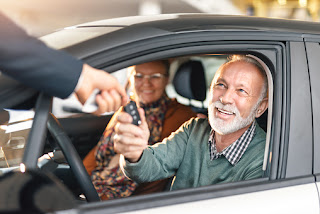 Many adult children worry about their parents’ capacity to drive. New car technology may be the answer.

One of the hardest decisions any adult child has to make is telling a parent they shouldn’t drive anymore. For the senior, the loss of independence and inability to get to social functions, doctor visits and grocery shopping can lead to depression and isolation. It is a major blow on the list of small indignities that aging often brings.

Adult children may take the keys in good faith when all Mom really needs is as low-tech as a new prescription for her glasses. Recent innovations in driving technology are game changers. Carmakers know that the population of older drivers is growing, and they are designing vehicles to help seniors stay behind the wheel longer.

Consternation over the ability of seniors as a whole to drive may be over-hyped.

By 2025, a quarter of drivers will be 65 and older. A recent study found these older drivers to be 16 percent likelier than drivers 25 to 64 years old to cause an accident, so there is increased concern as parents age. (However, it’s important to note that drivers under 25 are 188 percent more likely than adult drivers to cause an accident.) Additionally, older drivers are several times more likely to suffer a fatal injury when they are in an accident.

Interestingly, one of the reasons older drivers tended to be so much safer than their much younger cohorts was that they change their driving habits to make up for diminished competence. This self-regulation included not driving at night, staying off the road during peak traffic hours and sticking to familiar streets. Many older drivers voluntarily removed themselves from the driving pool, thus leaving more competent seniors as drivers.

Furthermore, drivers’ risk declined as seniors got older. The group over 70 was the least likely of any age group to cause a crash, and half as likely as the group over 55. The study concluded that the pool of drivers becomes more competent with age due to the least capable taking themselves off the road.

Finally, the study concludes that “because older drivers drive comparatively little, the risk they pose to overall traffic safety is actually much lower than that of other drivers, even though they are likelier to cause an accident when they do drive.”

While the above numbers may put a few minds to rest, there is plenty of cause for concern if Mom drifts into neighboring lanes, or Dad starts running stop signs.

Driving involves a complicated mix of physical, mental and sensory skills. The risk involved in poor driving is not only to oneself, but to others as well. The Commission on Law and Aging, in partnership with the American Psychological Association, has produced a trio of books on capacity assessment—one for lawyers, one for judges and another for psychologists.

The psychologists’ handbook addresses the functional component of driving ability, with an emphasis on finding supports and accommodations. Never ask if the person “has capacity,” but rather ask “does the person have capacity with support.” Would a higher seat or pillow, pedal modifications or a new set of eyeglasses fix the problem? Only then can an assessment be made for flexibility, strength and knowledge of the rules of the road.

Another piece of the driving puzzle is health. Does the driver have muscular or skeletal problems, a possibility of strokes or psychiatric disorders? Dementia can impact not only memory, but also spatial concepts and the judgment needed to safely drive. Family members need to investigate if the problem is temporary, or reversible with the right medication or therapy.

Finally, any assessment must address cognitive ability, which includes attention and processing speed, but also peripheral vision and the ability to multi-task. Reduced cognition may be temporary and/or reversible. Cognitive abilities can be influenced by poor sleep, prescription medications and substance abuse. Resolving these issues may return the person to many years of safe driving.

Is a New Car the Answer?

There are plenty of technologies in the newest crop of cars that could help many seniors stay on the road. The same modifications that make driving easier for all of us can be a particular boon to older adults.

The following six features in particular are designed to cut down on accidents:


Which Car is Right?

“It’s not about taking away the keys based on age, it’s about function,” according to Elin Schold Davis, coordinator of the Older Driver Initiative of the American Occupational Therapy Association. The current approach is “to support people to enable them to drive as long as possible.” For seniors who just need some adaptations, she recommends a $400 consultation with an occupational therapy driving rehabilitation specialist.

“There’s no such thing as the best car for an older person,” says Jacob Nelson, the director of traffic safety advocacy and research at AAA. “What matters are the features, and the features appropriate for one older driver are not necessarily appropriate for another.”

AAA offers help for seniors shopping for a new car by offering a site that categorizes makes and models of vehicles in a variety of price ranges.  The site outlines vehicles that can help older adults with different needs.

Drivers with vision problems can search for a high-contrast instrument panel with large number and letter displays, an auto-dimming rearview mirror and side mirrors with glare reduction.

Schold Davis counsels people to “plan to spend time choosing a car and select the latest built-in safety features you can afford.” While “not all safety features are alike car-to-car,” she says finding the right car is different for each person. Her top goal for seniors: “Decrease the likelihood of a crash and cushion against serious injury should a crash occur.”

Barring some dementias or serious conditions like advanced vision loss, “the diagnosis of a medical condition should not determine whether it’s safe for someone to drive,” Mr. Nelson said. “What does matter is how you manage your condition—whether, for example, you have diabetes and keep your blood sugar under control to prevent a blackout.”

By getting Mom a new car, maybe you can put off questions about her driving for years. Who knows, by then a self-driving car may make the discussion about taking away car keys a thing of the past.

Posted by Society of Certified Senior Advisors at 8:56 AM