When Seniors Argue: Finding the Cause 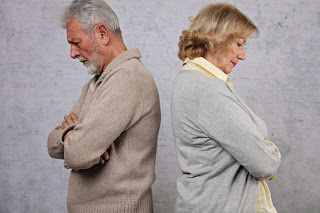 When an older adult becomes argumentative, you may think they're just getting irritable, but we now know there could be underlying factors that need to be addressed.

Jean finds herself arguing with her mother all the time. They had always had a good relationship, but since her mother was hospitalized following a fall, that bond has deteriorated. Jean has to help her mother more now, which only seems to make her resentful. Her mother refuses to let Jean help her bathe, and when Jean tried to clean out her kitchen cupboards, her mother got hostile. Her siblings, who live elsewhere, can’t figure out why Jean is having problems when Mom is always so nice to them.

Age can bring about many challenges, including more arguments. There can be a variety of root causes, including physical and mental conditions. If you are a caretaker or spouse, you will probably be the first to notice these symptoms.

Sometimes, it’s a change in tone. An older adult’s comments contain more sting than they used to, or a couple who has spent decades in relative harmony starts to have regular disagreements. Perhaps a senior who has enjoyed a good argument in the past becomes louder and loses the reasoning they used to have.

Therapists and others working with older adults say the first step is to find where the problem originates.

Increased anger could be one of the first signs of mild cognitive impairment (MCI), a precursor of dementia or Alzheimer’s, says Dr. Lisa Gwyther, director of the Duke Center for Aging Family Support Program and an associate professor in the department of psychiatry and behavioral sciences.

Dr. William Dale, chief of geriatrics at the University of Chicago Geriatrics Medicine, concurs. Pay attention if someone says, “‘Gee, Mom seems more argumentative or withdrawn than the last time I saw her,'” Dr. Dale cautions. “There is good evidence that the earliest signs of cognitive impairment are often emotional changes”—anger, anxiety, depression—“rather than cognitive ones”—memory, abstract thought.

It’s a diagnosis that is more and more common. In fact, 1 in 6 women and 1 in 10 men past the age of 55 will develop dementia in their lifetime, according to the Institute for Dementia Research and Prevention.

Suspicion and paranoia are hallmarks of mild cognitive decline. They lead to feelings of distrust and accusations that may be far from the truth. Jean’s mother may suspect her daughter is trying to remove food from her house, or take away her clothes while she bathes. The most rational adult can imagine similar scenarios if they are under the influence of cognitive decline.

Dr. Gwyther recalls another dispute where a wife was angry that her husband didn’t want to participate in the holidays, and declared he was being stubborn and lazy. But the truth was quite different. Aware of his slipping memory, he was anxious about remembering names and faces. Out of embarrassment and fear, he was trying to hide his potential failures.

Hoarding can be a sign of cognitive impairment, too. The hoarder may fear running out of money, or having everything taken away.

It doesn’t make the diagnosis any easier when MCI can come and go. “There are good days and bad days, good hours and bad hours,” says Dr. Gwyther. “Alzheimer’s and dementia don’t start on Tuesday—it’s a slow insidious onset.”

At the start of this article, we mentioned that Jean’s mother had recently been hospitalized. Physical ailments of any sort can upset emotional equilibrium.

“Most men get angry at what’s happened to them when they get ill, spouses get angry and scared when he’s not what he used to be—so they fight,” explains Dr. Nancy K. Schlossberg, professor emerita of counseling psychology at the University of Maryland and author of “Overwhelmed: Coping With Life’s Ups and Downs.” Chronic diseases can lead to chronic mood changes. In fact, some doctors argue that diabetes is so often accompanied by depression that it is part of the disease.

Other changes in circumstances can bring on depression or anger. Retirement, a move, loss of autonomy and shifting roles can trigger fear that is expressed as hostility.

It can be much easier to blame an older adult for these changes than to understand them.

“Part of the trap for the caregiver is the idea that you have to do it all, and the guilt you feel when you cannot live up to it,” says Dr. Gordon Herz, a psychologist in private practice in Madison, Wisconsin. Not surprisingly, resentment can soon follow, Dr. Herz adds, because it is hard to acknowledge that, “‘this is too much for me.’”

One way to improve the relationship is to get an ally on your side. A friend, doctor or pastor can give you perspective and perhaps intervene with your parent. Because you will always be the child no matter how old you are, your parent may listen better to someone else. A doctor can “prescribe” in-home help, and a friend can wield gentle influence.

Talking it over with a parent can lead to compromise and a successful outcome. Your parent may balk at the idea of something as personal as help in the bath, but agree to have someone make meals or clean the house. Once she realizes that getting help isn’t the end of her independence, she may be willing to allow more intimate assistance.

Hiring household help can take some of the burden off of you and enhance your relationship with your parent. If you are not spending every moment filling pillboxes, cleaning and scheduling appointments, there’s suddenly time to enjoy a meal together or listen to stories from your mom’s childhood. The result can put both the senior and caretaker at ease.

Posted by Society of Certified Senior Advisors at 9:10 AM