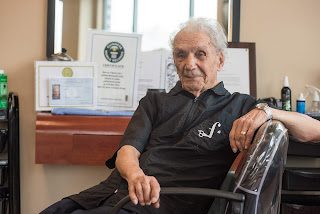 The oldest barber in the world still goes to work 40 hours a week. He started his career when Warren Harding occupied the White House.

Anthony Mancinelli began working as a barber when he was 11 years old, and a haircut cost a quarter. The year was 1922, and Mancinelli had emigrated with rest of his family three years earlier from Naples, Italy.

“I have some customers, I cut their father, grandfather and great-grandfather — four generations,” said Mancinelli, who has six great-great-grandchildren and charges $19 for a haircut nowadays.

He still shops for himself, does his own laundry, and pays his bills. When the shop he was working at cut his hours several years ago, he switched to another local salon where he could put in a full week. At first, the receptionist ignored his application because of his age, but he applied again. Owner Jane Dinezza was impressed with his ability.

He has adapted to a wide range of hairstyles over the years. “I cut them all,’’ he says, “long hair, short hair, whatever was in style — the shag, the Buster Brown, straight bangs, permanents.”

Mancinelli lives on his own since his wife of 70 years died 14 years ago. He visits her grave every day before coming in to work. He drives in to work, where “He won’t even let anyone sweep up his hair clippings,” says his son, Bob Mancinelli, 81. “Some of his older customers, he helps them in the chair. He’ll say to an 80-year-old guy, ‘Listen, when you get to be my age. ...’ They love hearing that.”

A veteran of World War II, Mancinelli has belonged to American Legion Post 1976 for 75 years, where he typically orders a whiskey sour. He’s been the choice for grand marshal of the New Windsor Memorial Day Parade more times than he can count.

“He never calls in sick,” Dinezza says. “I have young people with knee and back problems, but he just keeps going. He can do more haircuts than a 20-year-old kid. They’re sitting there looking at their phones, texting or whatever, and he’s working.”

Since being recognized as the oldest working barber by Guinness World Records in 2007, he has been asked many times what his secret is for his steady hand, trim build and health that allows him to still trim the bushes in his front yard.

Mancinelli avows that he’s never smoked or been a heavy drinker. However, longevity does not run in his family and he’s never been a fan of exercise. “I eat thin spaghetti, so I don’t get fat,” he jokes. Somehow, he has never needed glasses and takes no regular medication.

“I only go to the doctor because people tell me to, but even he can’t understand it,” he said. “I tell him I have no aches, no pains, no nothing. Nothing hurts me.”

“It’s just amazing that he still works full time,” says stylist Jen Sullivan, 20, who works next to Mancinelli. “Weekends here can get crazy — even I get tired of being on my feet — but he just keeps going.”

Schedule a cut with Mancinelli at Fantastic Cuts in New Windsor, N.Y., about an hour north of New York City.

Posted by Society of Certified Senior Advisors at 9:05 AM