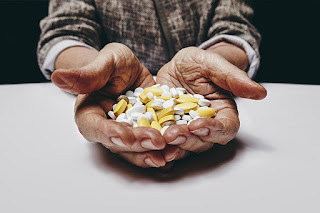 The crisis with painkiller abuse affects older adults for many reasons. For one, aging brings on more aches and pains.

It seems every day we read headlines about the increasing use and abuse of opioids—strong painkillers such as OxyContin, Percocet and Vicodin. They are often prescribed after surgery to relieve severe pain or for chronic conditions such as back pain. According to the Centers for Disease Control and Prevention, more than 19,000 Americans died from prescription opioid overdoses in 2014.

While we might picture the typical opioid addict as a young adult slumped over in a vacant doorway, older adults are the biggest users and abusers. An article in JAMA Psychiatry found Medicare beneficiaries had the highest and most rapidly growing rate of “opioid use disorder.” Six out of every 1,000 Medicare recipients struggle with the condition, compared with one out of every 1,000 patients covered through commercial insurance plans. According to the study, more than 300,000 Medicare recipients battle with opioid use disorder, and hospitalizations due to complications caused by opioid abuse or misuse increased 10 percent every year from 1993 to 2012.

Efforts are being made to check this crisis. In recent years, states have instituted laws that monitor people’s medication use to ensure they are not getting more drugs than their doctor prescribed. The state of Washington, for example, has a website that a pharmacy or doctor can check to make sure a patient isn’t acquiring medications from more than one pharmacy. If so, they may limit patients’ doses, prescribe fewer pills or cut them off altogether.

Seniors are more susceptible than the rest of the population to addiction, and the consequences can be more serious for several reasons:

At first, physicians prescribed opioids primarily for short-term relief immediately after surgery or an accident. But increasingly, the drugs are being used for long-term chronic pain. Unfortunately, there are not a lot of good alternatives to ease acute pain, especially for older adults.

Under Medicare Part D, the only effective drug therapy for opioid use disorder is buprenorphine-naloxone, but few doctors prescribe it because of cumbersome government regulations, including having to take an eight-hour class. In 2013, according to JAMA Psychiatry, doctors wrote far fewer prescriptions for buprenorphine-naloxone than for opioids.

A non-prescription medication, acetaminophen has been shown to work with opioids, so patients can use less of the opioid. The active ingredient in Tylenol, acetaminophen, can also be combined with nonsteroidal anti-inflammatory drugs (NSAIDs), such as ibuprofen, making opioids more effective. However, patients often need to limit use of over-the-counter drugs like Tylenol and Advil. Too large a dose over a period of time can cause long-term problems, especially in older adults, such as liver or kidney damage.

Others treatments are available to ease pain:

People who visit hospital emergency rooms come mainly because of severe pain, so hospitals tend to be the starting point for those who become addicted to opioids. However, one hospital, St. Joseph’s Regional Medical Center in Paterson, N.J., has opted to take a different route. Instead of treating patients who come in for migraine or kidney stone pain, for example, with opioids, the emergency department, one of the country’s busiest, has provided alternatives that include nonnarcotic infusions and injections, ultrasound guided nerve blocks, laughing gas, “energy healing” and a harpist, according to the New York Times.

“Use of Opioid Agonist Therapy for Medicare Patients in 2013,” JSeptember 2016, JAMA Psychiatry.