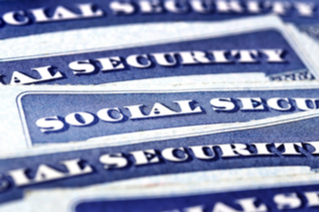 A plan calling for changes to the Social Security program has the backing of many Americans, but can it deliver?


The Social Security program is critical to the well-being of many older Americans. Each month, 43 million people receive a Social Security payout, and three out of five count on it to cover at least half of their expenses. If there was no Social Security program, the Center on Budget and Policy Priorities, an American think tank, estimates that the rate of poverty among retired workers in the U.S. would quadruple.

But Social Security payouts can’t continue at their current rate forever. Sometime in 2034, according to the Social Security Board of Trustees, the program will have to cut payouts by as much as 21 percent. Asset reserves will run out, and a workforce that is smaller in size than the population of retirees won’t generate enough income for the system to cover payments.

How Social Security is Funded

Interest on the $2.8 trillion in spare cash, invested by law almost entirely in special issue bonds from the federal government, creates the second source of funds. With lending rates just off historic lows, the bonds return in the 2 to 3 percent range. That’s still enough to kick in about 10 percent to the program annually.

But the majority of funding (86.4 percent) is a result of the 12.4 percent payroll tax. The tax on earnings is paid in full by the self-employed, and often split 50-50 between employers and their employees. Currently, earned wages up to $132,900 are subject to the Social Security tax.

The image below is from https://www.fool.com/retirement/2016/10/23/the-reason-why-social-security-cant-go-bankrupt.aspx, which credits Image Source: Social Security Administration. 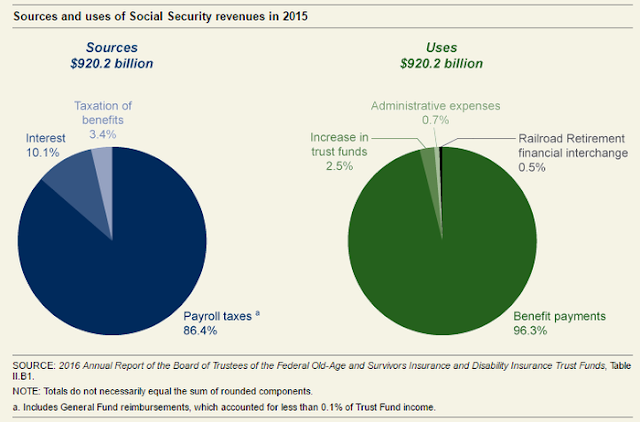 
A new plan gathering steam, backed by Washington, D.C. nonprofit The Seniors Center, calls for a trio of changes to the Social Security program. The plan seeks to:


These changes would provide transparency in the flow of payroll tax dollars from paycheck to Social Security payout, and transform the way asset reserves are currently invested, which is in special-issue Treasury bonds.

However, it would seem the system already has clear income and expense channels. Every penny that comes in is accounted for, and 99 percent of funds collected end up in the hands of eligible beneficiaries. Less than a single percent of collected revenue is spent on administrative costs.

It’s also worth noting that the program is its own separate entity. It can only use funds created for it through payroll tax, interest income and the taxation of benefits, along with its nearly $2.9 trillion in current asset reserves.


Lawmakers have publicly bemoaned the use of Social Security asset funds to pay for other programs for many years. Here’s former Speaker of the House Paul Ryan on July 7, 2005:

“Congress needs to stop raiding the Social Security trust fund to pay for unrelated government spending. The American people are right to demand an end to this shameful practice. … For over 30 years, Congress has spent the Social Security surplus on other government programs, and it’s a safe bet that this will continue unless we can enact legislation that requires a change.”

Despite Ryan’s and many others’ public outrage at the perceived situation, the economic reality is much different.

How much has the federal government borrowed from Social Security funds? The question is largely one of semantics, since the U.S. Federal Reserve creates our money in the first place. For a simple explanation of the economics involved, this response by self-described eco-nerd Chris Brown is concise yet thorough. At any rate, funds are never segregated into a separate pot for Social Security, just like your bank never has your money in cash in a separate account for you.

Furthermore, it’s a legal requirement that Congress has the ability to borrow money from Social Security’s asset reserves. In fact, this borrowing generated $85.1 billion in interest income for the program in 2017. Even as assets are anticipated to begin spending down, the next decade is expected to yield more than $800 billion in interest income. Take away this source of income, and Social Security’s funding problems are exacerbated.

The third point, which calls for the government to make accelerated paybacks of funds that it has borrowed from Social Security, may be a bad idea. It would choke off interest in-come for the Social Security program while requiring the government to borrow funds, thus triggering it to issue more debt. As our national debt rises beyond $22 trillion, it seems unwise to balloon it further and eliminate a source of funding for general expenditures.


It’s clear that in the near future, the Social Security system needs to evolve to meet retirees’ needs. However, we must take a good look at the specific provisions of any plan to ensure a change is truly a step forward.


Health – Preventing the Deadliest Diseases is Easier Than You Think

Lifestyle – Are You Prepared to Retire Before 60?

Coffee Break – How to Stay Healthy and Happy Your Whole Life