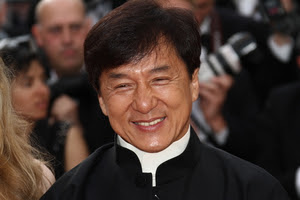 The most recognizable actor worldwide isn’t a typical Hollywood leading man. Nope, it’s martial arts expert Jackie Chan! You may not know that he’s also a film director, producer, stuntman and accomplished singer. He’s also been tapped as one of the top 10 most charitable celebrities in Forbes magazine.

Born in Hong Kong to parents who were fleeing the Chinese Civil War, Chan was sent to the China Drama Academy at the tender age of six when his parents emigrated to Australia. Chan trained in martial arts and acrobatics for a decade, learning Karate, Judo, Taekwondo and Jeet Kune Do.

His film career began when he was only five. At 17, he appeared as a stuntman for the first time in a Bruce Lee flick. But it wasn’t until 1980 that Chan found success in the action comedy genre, which would cement his reputation around the globe. The actor found fame playing inept, kindly men at the mercy of friends and family, who manage to come out on top in spite of the odds against them. He has a vast body of work, with more than 150 films to his credit. In recent years, Chan has called a halt to the dangerous stunt work (he never used a double) that resulted in dozens of broken bones to opt for more dramatic roles.

Many don’t know that Chan was enrolled in the Peking Opera School during childhood. He’s released 20 albums and often sings the theme song for his movies, which may play over the rolling credits at the end of the film. Chan can croon in Cantonese, Mandarin, English, German, Korean, Japanese, Spanish and Thai. He’s also fluent in American Sign Language. 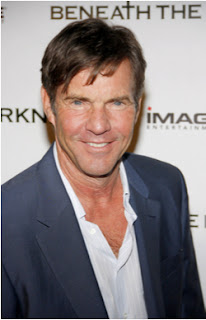 
Dennis Quaid switched effortlessly from comedy to drama, notably appearing in Breaking Away (1979), The Right Stuff (1983) and The Big Easy (1986) among many other films and television series. More recently, he garnered a New York Film Critics Circle Award for Best Supporting Actor for his work in 2002’s Far from Heaven.

The little brother of Randy Quaid, Dennis has tried his hand at producing, directing and writing. He also sings with his band, the Sharks, piloted a Cessna and is an excellent golfer.

Quaid’s fraternal twins, born in 2007, were mistakenly given a dose of heparin 1,000 times stronger than recommended for infants when they were only ten days old. Although they recovered, Quaid’s response was to advocate for patient safety, producing a pair of documentaries and lobbying Congress to allow citizens the right to sue drug companies for negligence (the packaging for the different heparin strengths was similar enough that the nurse mistook one for the other). 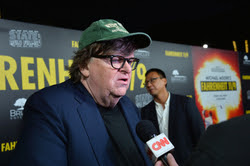 Famous for his documentaries that often champion liberal ideals, Moore is a product of a Mid-western upbringing in the now-notorious Flint, Michigan, raised by parents who worked at General Motors back in its heyday. His uncle fought for the rights of the common man as a founder of the United Automobile Workers labor union.

Moore entered the political fray early as the youngest person elected to the office in the U.S. when he won a school board seat at the age of 18. A journalism major at the University of Michigan-Flint, he dropped out of school and at 22 founded his own magazine. He went on to edit Mother Jones, but was fired after four months.

Moore’s Bowling for Columbine, which examines gun culture in the U.S., earned the Anniversary Prize at the 2002 Cannes Film Festival, as well as an award for Best Foreign Film. It also nabbed an Academy Award for Documentary Feature in this country. It was the highest-grossing documentary of all time for a documentary until it was overtaken by Moore’s Fahrenheit 9/11, which has pulled in more than $200 million worldwide.

In 2005, Moore himself was named one of the world’s 100 most influential people by Time magazine for his body of work on globalization and capitalism in America, including the influence of large corporations and health care. 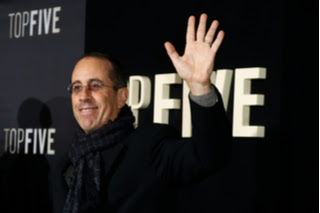 Jerry Seinfeld got rich playing himself on the TV show Seinfeld which ran for 10 years and became the most popular and successful sitcom on American television. The last episode aired in 1998, but you can still catch reruns. Seinfeld has said he was inspired by the old Abbott and Costello Show.

Seinfeld is known for his comedic genius. Comedy Central dubbed him the “12th-Greatest Comic of All Time” in 2005, and he continued to tour after Seinfeld ended. He was also Jay Leno’s first guest, and the two share a friendship and love of sleek cars. Seinfeld reportedly has more than 150 vehicles, mostly Porsches, split between West and East coast garage facilities.

The comic has made many guest appearances on shows such as 30 Rock where he played himself. He counts many fellow comedians among his friends, and initiated a Web series in 2012 called Comedians in Cars Getting Coffee that featured casual conversations between another comic and himself over a cup of joe.


Health – Preventing the Deadliest Diseases is Easier Than You Think

Lifestyle – Are You Prepared to Retire Before 60?

Coffee Break – How to Stay Healthy and Happy Your Whole Life