Fight Dementia with your Fork 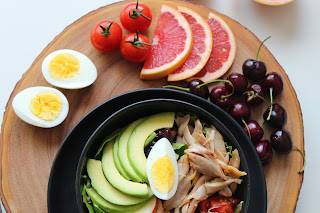 The MIND diet can drastically lower your risk for Alzheimer’s disease, among other conditions. Here’s what the lead researcher suggests regarding MIND and foods thought to be “good for you.”


A Mediterranean-inspired diet was recently proven to dramatically lower the risk of dementia in older adults. But just because it originated in Italy doesn’t mean you should stock up on frozen pizza and lasagna. Instead, the MIND diet focuses on plenty of vegetables, whole grains, beans and olive oil. It even recommends a small glass of red wine daily. The meals are also linked to a healthier heart and longer life, coupled with a reduced risk of diabetes and high blood pressure.
MIND stands for Mediterranean-DASH Intervention for Neurodegenerative Delay. The DASH component is for Dietary Approaches to Stop Hypertension. Based on the eating style found along the sunny coast, the healthy regimen is crossed with a similar diet plan originally conceived to lower hypertension.
Plant-based cooking forms the basis of the diet, with seafood as the main animal protein. Other meats, preferably chicken or turkey, are used sparingly to flavor dishes, and dairy takes a back seat to olive oil. Raw nuts are encouraged, along with whole grains and beans. Consumption of sweets, pastries and fried foods is discouraged.  Check out the MIND Diet info-graphic below: 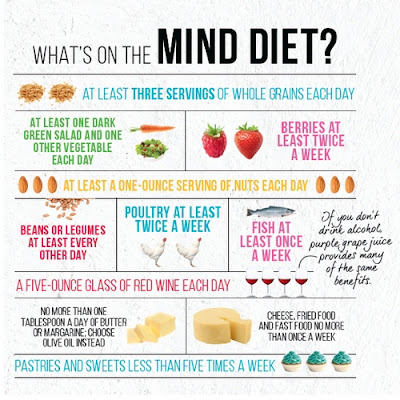 "Eating a healthy plant-based diet is associated with better cognitive function and around 30 percent to 35 percent lower risk of cognitive impairment during aging," said lead author Claire McEvoy, of the University of California, San Francisco School of Medicine. She noted that “the findings are relevant to the general public” because the study took place with a nationally representative population of older adults.
The MIND research was conducted among nearly 6,000 older Americans whose average age was 68. Those who most closely followed the MIND diet benefited at the highest level, but even participants who followed it marginally experienced an 18 percent reduction in cognitive impairment.

The MIND diet puts cheese and butter in the “unhealthy” category. But what about milk? McEvoy says that it should be low-fat to avoid increasing your saturated fat intake. “Dairy is certainly linked to better bone health, so just be cognizant of the higher calories and higher saturated fat,” she noted.
Eggs are another item that a lot of us eat. Is it better to only consume the white? And are there brain health benefits we can get from eggs? McEvoy busts the only-eat-the-white myth by highlighting the lutein, vitamin E and choline, which are only contained in the yolk. All of these are good for your brain. She said that more research needs to be done around all of the nutrients in eggs, but that most are contained in the yolk, not the white.
The MIND diet includes whole grains, and recommends a hearty dose of three servings a day. But aren’t grains bad for us? Dr. McEvoy responded that wheat is not the culprit it has been made out to be.
“If you look at the data, the studies that have been conducted, the Mediterranean and the DASH diets have a ton of evidence of the highest caliber studies, the randomized trials, where inflammation is actually decreased on those diets,” McEvoy said. “As a society, we do make changes to the grain sources with genetic modification and more limited varieties of grains, and that is unfortunate. Whether that has impact on some individuals I think is an open question, but the data shows that whole grains have so many health benefits for so many chronic conditions.”

It seems confusing that wine is actually recommended on the MIND diet, when alcohol is generally associated with negative effects on cognition. It’s important to point out that the 5 ounces advised is a very small glass, and McEvoy adds an additional caveat.
“Unfortunately, people perk up over the inclusion of wine, but don’t realize how low the benefits are,” she said. “With every drink over that very low level, you are increasing the risk of cognitive decline and dementia, as well as heart disease and breast cancer.”

How many servings of fish do we really need to eat to stave off Alzheimer’s? Again, McEvoy follows the research with her reply. She said that studies have shown a benefit with as little as one serving of fish or seafood per week. Not enough research has been done to verify that the more fish servings eaten, the greater the benefit to the brain. Therefore, McEvoy simply recommends at least one serving of fish per week.
The more fish you eat, the greater your intake of omega-3 fatty acids. With the popularity of fish oil supplements, isn’t that a good thing for brain health? McEvoy said that the research doesn’t tell a consistent story.
“From the clinical trials that have looked at omega-3 fatty acids in supplements, there are very few that have shown positive findings with slowing cognitive decline,” McEvoy said. “However, we do know that DHA (docosahexaenoic acid) is one of the most important fats in the brain. Studies of neurodevelopment show that DHA is really essential for the brain. And its chemical structure allows for a lot more plasticity of the brain so that there is better neurotransmission. So why don’t we see a clearer association when we look at omega-3 fatty acid levels in the diet or blood in relation to cognition? My view is that we just haven’t figured out what is going on yet.”
Many species of fish and seafood show high levels of toxins such as mercury. Does the presence of the toxins diminish the beneficial effects of eating fish? McEvoy did a study a few years ago that measured fish intake in people who had agreed to donate their brains to science upon death. After examining more than 200 brains, McEvoy failed to find a link between higher seafood consumption and unhealthy brains. However, those who reported eating at least one seafood meal a week showed lower evidence of disease in their brain than those who didn’t include seafood.

Perhaps the most important factor in Alzheimer’s research is that there is strong evidence that what is good for your brain is good for your body. Study after study, according to McEvoy, shows that the crucial formula of a healthy diet, exercise, enough sleep, low stress and positive social interactions gives a kick in the pants to many chronic diseases, not just dementia. “All the chronic diseases – diabetes, stroke, hypertension, heart disease, dementia – you attack them all,” she said.

Currently, 300 older adults aged 55 to 84 are involved in a trial to test the MIND diet’s effect on cognitive function measured by a battery of 13 tests. A control group of 300 will take the same tests and eat as they normally would. At the end of the three-year study, MRI imaging will measure atrophy in the hippocampus.
Hemoglobin, cholesterol levels and blood pressure are monitored at each of five visits over the three years. Participants will also be checked for brain-derived neurotrophic factor (BDNF), which has established links to exercise and is associated with reduced brain atrophy.

Posted by Society of Certified Senior Advisors at 3:04 PM