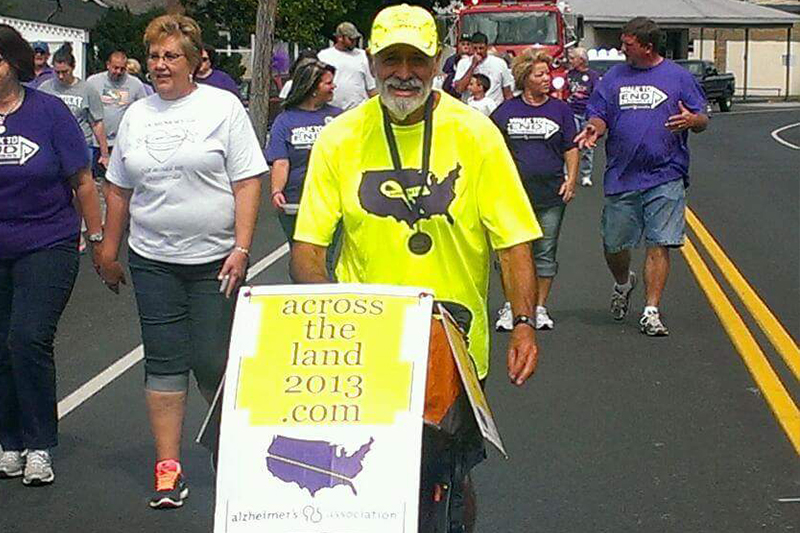 After Jack Fussell lost his father to the disease and then almost died from an ulcer, he committed to a life of health and giving back.

A combination of factors led Jack Fussell, in his 60s, to run from one end of the country to the other. First was the death of his father from Alzheimer’s disease. A year later, he was diagnosed with a bleeding ulcer and told he had only one year left to live. The Georgia resident decided it was time to turn his life around and commit to a healthy lifestyle. He started by running and dropped his weight from 250 to 100 pounds.

At some point, he decided his exercise regimen should be for a good cause—to raise awareness and money for Alzheimer’s. In 2013, at age 62, he ran from Georgia to California. The following year, he repeated the trip, although he ran only part of the time, preferring to use a car so he could meet with more people. He did some 50 TV and 100 newspaper interviews, plus met with four governors. He’s met with students and chambers of commerce—whomever he could find to talk to about the disease that currently affects 5 million Americans, at a cost of $259 billion annually. Every 66 seconds, someone in the U.S. is diagnosed with Alzheimer’s.

Alzheimer’s is devastating,” Fussell says. “It’s hard for the individual that is diagnosed, but it’s really the families and caregivers that struggle the most. Not only do people need to donate to this cause, but they need to know how serious it is.”

Fussell was recognized by Maria Shriver on mariashriver.com as an “Architect of Change”—people who see a problem and who do something about it.

He said he was drawing attention to Alzheimer’s for two reasons. First, he wants to let caregivers know that they can get help from the Alzheimer’s Association, which reports that 40 percent of caregivers die before the patients because of the stress. Second, he wants to inform the general public “how devastating [Alzheimer’s] is to patients and caregivers . . . so maybe you will feel what you need to feel to call lawmakers and put it on their radar.“

“About my Epic Journey from Savannah, GA to Monterey, California to #ENDALZ,” April 3, 2017, Across the Land.

“Running Across America to Spread Awareness for Alzheimer’s,” March 23, 2015, mariashriver.com.

Posted by Society of Certified Senior Advisors at 1:31 PM