Avoid Slow Traffic with Your Phone 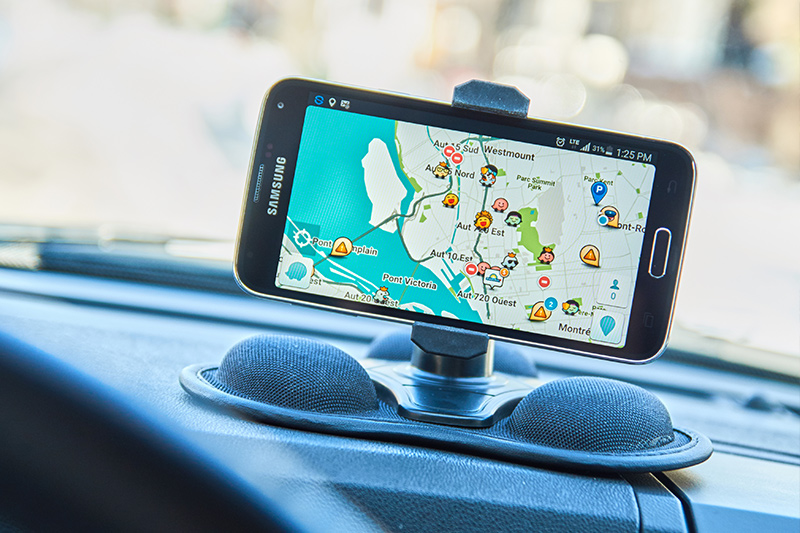 Smartphone apps alert you and find new routes to your destination, and will even find you a parking spot.

In the context of life’s small frustrations, sitting in traffic is one of the more challenging. This is especially true when our days are crammed with obligations and appointments, and we don’t have time to just sit there. In the old days—pre-smartphones—we depended on our car radio to tell us about accidents on major highways.

But with the introduction of smartphone technology, we don’t need to rely on traffic helicopters. There are dozens of apps that can help you navigate through busy traffic. And after you arrive at your destination, an app can help you find a parking spot—another of life’s small headaches.

One of the most popular navigation apps is Waze. What sets this free app apart from others is that it collects information from other drivers to alert you to congested traffic. Drivers can use the Waze app to report traffic accidents, hazardous conditions, road closures and police officers ahead. Its maps use icons to show specific hazards and even how long the traffic jam extends down the highway. When Waze spots congestion, it automatically reroutes you to a less crowded road.

Although Google Maps does much more than navigation, such as finding the closest restaurant, some experts consider it the best for surviving heavy traffic.

Because Google Maps has the most users of any mapping app—some billion people use it each month—it can gather the most information. If your Android smartphone has location services turned on or your iPhone has Google Maps open, you are continuously sending data to Google, which uses that information to determine traffic flow, according to Business Insider. For example, if you’re sitting in traffic, Google knows that traffic is backed up and provides customers with different routes.

Since Google bought Waze in 2013, Google can combine its data with reports from Waze users, historical traffic data it's built up over the years and reports from local traffic departments, such as police.

Other traffic apps might not be as popular or powerful as Google Maps or Waze, but they get the job done.

INRIX Traffic. This app is powered by Autotelligent, a cloud platform that proactively makes decisions so drivers don’t have to. INRIX Traffic creates a daily itinerary of upcoming drives, and Autotelligent monitors road conditions to determine the best time to leave and the optimal route to take based on real-time traffic and a driver’s preferred routes.

Now Find a Place to Park

Waze recently added a "Where to park" feature, which finds the closest parking lots near your destination and tells you how long it will take to walk from the lots to your destination. Doing one better is Spot Hero, which also compares rates at different garages and lets you reserve and pay for the spot on your phone. Your parking pass, with a bar code for entry to the lot, also provides directions to the lot or garage. This app only works in selected cities, such as New York and Chicago. Check out its website for a complete list of participating cities.

Other parking apps will show you parking spots instead of garages. Parking Mate, an iOS app, shows you which parking locations are safe, notifies you when a meter will expire, informs you of restrictions such as street sweeping, and adds a text or photo to remind you where you've left your car.

Some apps are specific to large cities known for their parking issues. Can I Park Here? (NYC) lets you take a picture of a parking spot in New York City and then tells you if it’s a legal place to park—and therefore avoid a ticket. In this app, you can also set an alarm that alerts you 15 minutes before your meter expires. Chicago Parking lists meter rates for city neighborhoods and finds the closest fare box. It also includes information for 300 Chicago parking garages, with hours, rates and directions.

“10 iPhone Apps to Help You Avoid Traffic on Your Commute,” Kenney Meyers.

“The 2 simple reasons why Google Maps is better than everything else,” Business Insider.

Posted by Society of Certified Senior Advisors at 8:21 AM