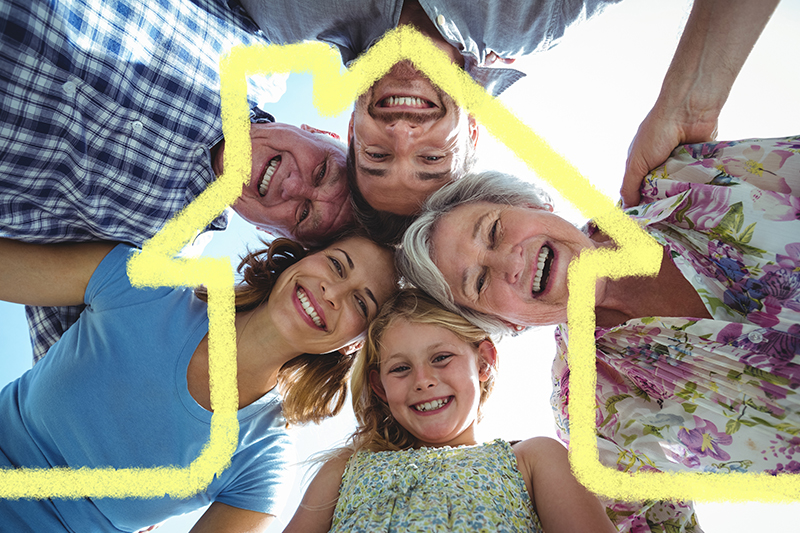 For those who bemoan the lack of contact today between older and younger people, a new innovation in housing is providing hope for the future. Intergenerational housing brings together up to three generations in a community. One model pairs foster families with older adults who offer their services and support, while another joins military veterans with others in a supportive community. In the Netherlands, college students get free housing in a senior retirement complex in exchange for helping older residents.

Hope Meadows, in Rantoul, Ill., was designed to combine several vulnerable populations—children in foster care, their foster families and older adults—in what has proven to be a win-win situation. The intergenerational community was started in 1994 to help ease an urgent social crisis. Brenda Eheart was a sociology professor at the University of Illinois when she became aware of large numbers of children separated from their birth parents in the wake of the crack epidemic in Illinois. All too often, the children were not adopted together, and foster parents weren’t getting the social and emotional support they needed to raise often difficult children. She founded Hope Meadows in an effort to build communities where foster families and older adults could live together and help each other.

The older residents are obligated to engage regularly in various supportive activities, such as mentoring, tutoring and gardening. But many say they get as much out of the arrangement as they give. For one, this is a chance to contribute to the world, but they are also on the receiving end of a lot of affection. One Hope Meadows resident describes his experience:

We had retired and we were undecided as to what we wanted to do. You get to a point in your life; you know you feel like, ‘Well, I am used up. Nothing’s left.’

But then we got involved with Hope. . . . It’s so gratifying to see the changes in these children and to feel like we have a part in that. We see the children come in and realize the needs they have. They are so hungry for love and attention. And then we give this to them. And it is so rewarding.

I know the primary focus is on the children, but they also make us feel so good because they are concerned about us. I can hardly step outdoors without one of the children asking, ‘How is Grandma Mary doing? Is she feeling okay?’ And they are real concerned. . . . Things like that make you feel a part of something.

Today, more than 20 kids, constituting seven families, live in Hope Meadows. Seniors come from all over Illinois and the United States to be a part of the community. These older residents monitor the playground; play croquet, basketball and soccer; and throw Frisbees with the children. They paint the interior of homes for incoming residents and keep the grounds free of weeds and filled with flowers. They take the children on outings, including a sightseeing trip to Washington, D.C. One resident took her 6-year-old neighbor to her sister’s farm, where three generations—grandparents, parents and children—readily accepted the boy. He later told his adopted “grandmother” that he had never seen so many nice daddies.

In the Netherlands, there’s a different kind of partnership between older and younger generations. At the residential and care center Humanitas, college students get free room and board in exchange for 30 hours of volunteer work per month. This helps solve two problems: a shortage of decent, affordable student housing and a need to fill long-term facilities after the Dutch government’s 2010 decision to restrict continuing-care funding for citizens over age 80. Students teach residents new skills, like email, social media and Skyping. And not only do older residents get connected to the outside world, but also to the younger generation.

Since Humanitas opened its doors to students in 2012, two more nursing homes in the Netherlands have followed suit, and a similar program was recently introduced in Lyon, France. In the U.S., Judson Manor retirement community in Cleveland opened its doors in 2010 to graduate-level students from the Cleveland Institute of Music. In exchange for free accommodations, the students provide cultural programming at all three of Judson’s retirement communities. The relationship has flourished, with students and residents becoming friends, and residents sharing art lessons, cooking tips and career advice.

Recently, Judson expanded the program to include undergraduate students from the Cleveland Institute of Art.

In New Orleans, plans are underway for Bastion, an intergenerational community for wounded, ill or injured veterans who will live alongside retired military and civilian volunteers. Bastion is the brainchild of Dylan Tete, who suffered from depression after serving in Iraq. After he found help, he wanted to create a community that would support men and women with brain injuries or with post-traumatic stress syndrome, among other issues. He also wants to include military widows with small children, and older adults—either former military retirees or civilians. Because the military is built on the philosophy of watching your buddy’s back, Tete wants to continue that safety net in civilian life.

Generations of Hope, a nonprofit foundation, is a pioneer in promoting intergenerational housing. In addition to Hope Meadows, another of its successful communities is Bridge Meadows. Based in Portland, Ore., this community opened in 2011. Families who adopt at least three children from the foster care system can rent 4-bedroom houses at Bridge Meadows. Meanwhile, seniors who live there must spend at least seven hours per week volunteering with the children, including teaching arts and crafts, giving music lessons, leading story hours and going to the park.

Three other places that adopted the Generations of Hope philosophy—older adults volunteering their time for reduced housing costs, with a focus on vulnerable populations—are Hope Village in Phoenix; the Treehouse Community in Easthampton, Mass.; and New Life Village in Tampa, Fla. New Life was founded by Sister Claire LeBoeuf of the Congregation of the Sisters of Holy Cross, who has spent her entire adult life advocating for abused and neglected children.

Other intergenerational communities are open to anyone, not just foster families. Two of these are Fresno Cohousing in Fresno, Calif., and Camelot Cohousing, in Berlin, Mass. Like the other intergenerational communities, older residents praise the interaction with children. Said one resident at Fresno: “It's great to watch kids tear up and down the sidewalk on their scooters or stop to talk to us. . . . Senior cohousing, I think, would be very boring.” And a member of Camelot declared, “I love that I get to have relationships with children in the community as well as older people.”

“A way of life that makes a difference,” Generations of Hope.

Posted by Society of Certified Senior Advisors at 10:40 AM