Older Adults Can Be at Risk of Dehydration 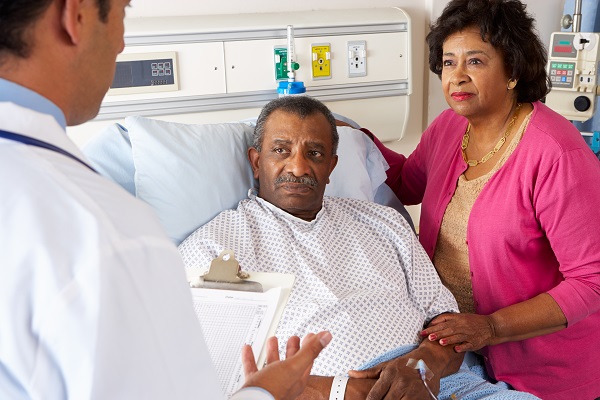 Decreased fluid intake can exacerbate age-related problems, such as declining kidney function, causing seniors’ health to worsen and sometimes landing them in the hospital.

When Walter, 94, got the stomach flu, he became so weak from vomiting that he was taken to the hospital, where he received fluids. A week later he was back in the hospital after falling in his assisted-living apartment. After the second hospital visit, unable to stand on his own, he entered a nursing care facility. It’s likely that, in the intervening week between hospital visits, Walter, who suffers from early dementia, didn’t know to keep drinking water or other fluids and stay hydrated. In a two-week period, he lost 20 pounds and had to start using a wheelchair.

Dehydration, which occurs when someone loses more water than they take in, is a serious problem, and a frequent cause of hospitalization, especially for the elderly. Depending on the definition of dehydration, between 6 and 30 percent of people aged 65 years and older who are hospitalized are dehydrated (International Journal of Preventive Medicine). In a related study, researchers found that 48 percent of older adults admitted into hospitals after treatment at emergency departments showed signs of dehydration (Parent Giving).

As we age, several bodily functions decline that make us more susceptible to dehydration. When you add in other outside factors, such as the stomach flu, the combination can turn an otherwise healthy person, like Walter, into someone suffering from various medical issues. Causes of dehydration include:


Water loss. As we age, the body doesn’t hold as much water because we lose muscle mass, while our fat cells increase. By the time we’re 80, we have 15 percent less water than when we were 20, making our bodies more vulnerable to dehydration from even minor fluid loss.

Kidney decline. Starting around age 50, and becoming more serious around age 70, the kidneys begin to lose some of their ability to remove toxins from the blood. Because kidneys are less able to concentrate urine, we expel water more quickly as we age.

Less sensation of thirst. Older people lose the sensation of being thirsty, much as our taste buds decrease as we age. Also, some seniors may drink less because they fear incontinence.

Medications. Drugs such as diuretics, laxatives and angiotensin-converting enzyme inhibitors (used to treat high blood pressure, among other conditions) can cause more frequent urination or perspiration, which interferes with fluid balance. Psychotropic medications, such as antipsychotics, cause dryness of the mouth, constipation or urinary retention, which can affect hydration. Additionally, older adults are often taking several medications at once, further complicating the problem.

Illness. Vomiting is a major cause of dehydration, because of fluid loss. A fever has the same effect, and generally the higher your fever, the more dehydrated you may become. A combination of diarrhea and vomiting, as in Walter’s case, can increase the risk of serious health issues.

Dehydration can lead to serious complications, including (from the Mayo Clinic):

One researcher compares dehydration to a pump trying to work with less fluid, which puts a greater strain on the heart. For older adults with serious medical conditions, dehydration has been linked to increased rates of death. Despite what seems a trivial matter, the costs of not treating dehydration early can be high: a U.S. study in 1999 evaluated the avoidable costs of hospitalizations due to dehydration at $1.14 billion (from Hydration for Health).

How to Avoid Dehydration

Although water is the best beverage choice, to motivate someone to drink, you may need to cater to their preferences, such as fruit juice. (However, if the individual is diabetic, caution should be used because of blood glucose values and dietary restriction of sugars) or decaffeinated coffee and tea. Avoid alcohol and caffeine, which have a diuretic effect, causing the kidneys to excrete more water. Caregivers should ensure the older person they are caring for has water by their side at all times—for example, on a bed stand or next to their favorite chair—especially if they do not walk much.

In addition, if the individual has a swallowing problem and needs thickened fluids, this needs to be watched carefully to avoid aspiration of liquids into the lungs. If dehydration is suspected, because the person is not drinking or does not have a normal urine output, a temporary solution could be a sports drink, which has electrolytes needed by the body. However, caution needs to be taken to not over-consume because of the sports drink’s higher sodium content.
Eat high-water-content fruits such as watermelon, berries, grapes and peaches. Water-rich vegetable options include tomatoes, lettuce and summer squash. Soups are also a good way to sneak extra liquid into a diet.


Check urine color to make sure it is clear or pale yellow. Dark urine or infrequent urination is a classic sign of dehydration, as is decreased urination and urine output.

Other signs of dehydration to watch for are:

“Hydration and the elderly,” Hydration for Health

“Dehydration: A Hidden Risk to the Elderly,” Parent Giving

Posted by Society of Certified Senior Advisors at 9:30 AM