There comes a time when it’s necessary for older adults to talk with their adult children about important life decisions that will affect them all. It’s a difficult conversation that most people avoid. 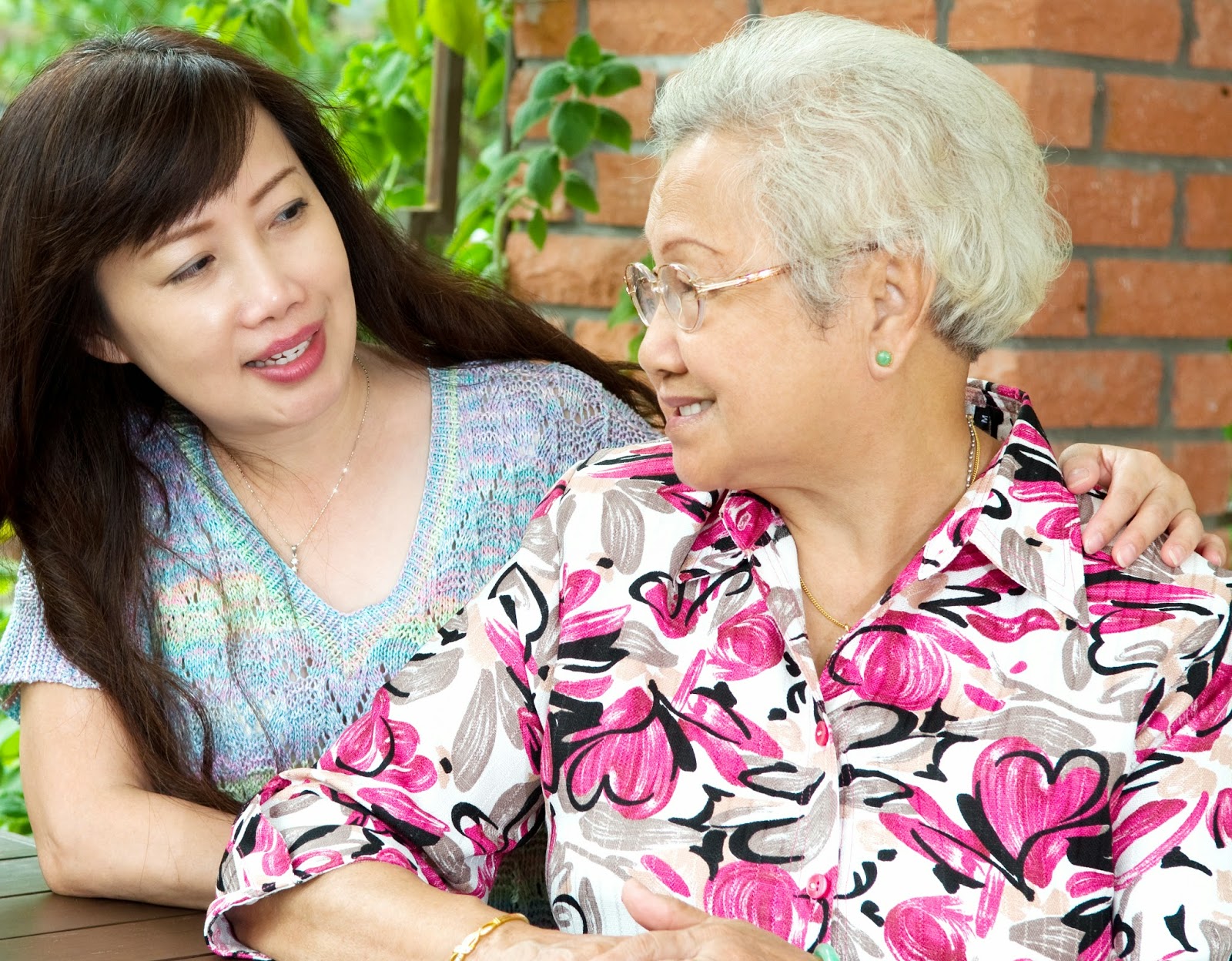 Do you remember how difficult, and absolutely necessary, it was when it came time to sit with your kids to have The Talk, the one about the birds and the bees? Your initial reaction was probably to procrastinate, to keep the door firmly closed on any conversations that revolve around the facts of life with your twelve-year-old.

But, of course, the talk isn’t just about plumbing issues like where things go, how things work, and how embryos turn into babies. It’s also about the judgments and decisions that need to be made as our children enter an important new chapter in their lives.

Ultimately, you undoubtedly confronted your own discomfort and stepped up to the talk because you recognized that there were real, life-altering consequences to putting it off indefinitely—unexpected pregnancy, sexual disease, and unfulfilling relationships with the opposite sex, to name a few.

But, as the first conversation unfolded and subsequent ones ensued, you and your spouse both began to realize that you were empowering your child for something that would have far-reaching and on-going lifetime consequences.

The Other Talk
There is another equally critical time in your kids’ lives when you need to sit them down to talk about the facts of life. This time, it’s about the many issues and decisions that will confront you and your children during your last chapter of life. Some call it the retirement years.

It’s time for The Other Talk.

Unfortunately, you will most likely put off indefinitely any substantive discussion with your children about what they might expect in your later years.

In fact, most parents never have the Other Talk. Data from the National Hospice Foundation (Cullinane and Fitzgerald 2004) reported that 75 percent of Americans have not made their end-of-life decisions known, either through verbal or written communication.

Furthermore, a recent survey by AARP (Jacoby 2012) found that nearly 70 percent of adult children have not talked to their parents about issues related to aging. Some of them avoid this most intimate of conversations because they believe their parents don’t want to talk about it. Others think they know what their parents want. And some simply don’t want to face the very real truth that old age may include disease, injury, frailty, even loneliness and depression.

Why do most Americans keep the door firmly closed on this important conversation? Because it’s remarkably similar the birds and the bees discussion.

Emotionally challenging subject. First of all, sitting down with your kids to talk about your last chapter can be uncomfortable, painful, depressing, even paralyzing, especially when you come to the part about the various stages of your deterioration, mentally and physically.

Not surprisingly, the reality is that this sweep-it-under-the-rug attitude usually has as much to do with the mental fragility of the parents as it does with that of the children. It seems the longer they can cling to the time when they were healthy, independent, and carefree, the less they need to deal with the coming reality.

The unfortunate consequence of protecting the kids is that, when circumstances eventually force your family to confront reality, whether it be a serious injury, a severe financial setback, or a life-threatening diagnosis, you—but most likely your kids—will be reacting in crisis mode. As a consequence, your options will most likely be dramatically restricted, and the pressure to make decisions quickly can become overwhelming.

Evolution of parent/child interaction. For many of us, the most challenging and sensitive issue that we will come up against in the Other Talk are the coming changes that we will experience.

There is a fundamental and potentially difficult adjustment that occurs as we enter our last chapter of life. It is the reversal of roles between parent and child that is triggered when you reach the point, physically and/or mentally, where you can no longer operate independently.

In essence, the parent becomes the child and the child becomes the parent. Why is this reversal of roles so difficult and potentially life-changing for both parties? Because it is not merely a mechanical reassignment of responsibilities—it is the shattering of the relationship that you as a parent have had with your children since their birth. As a result, you lose the power and control of being the adult and your kids give up the security and freedom of being the child.

Impact of role reversal on the parent. For the parents, it’s the crushing realization that despite all the successes they may have achieved throughout life, all the good deeds bestowed on others, all the love and support heaped on family and friends, the great injustice at the end of life is the fear of losing control.

As described by Kathleen, a retiree in Florida, it can start out as an uneasy premonition:

Doing it our way isn’t going to work indefinitely; in fact, I feel we’re in this in-between stage, a time when we can still control how we live but not how much longer we’re going to be able to make choices before we’ve become ‘too old.’ When I contemplate it, what we’re all dealing with is how much longer can we continue to be us?

As the aging process continues, the primary reason that older adults begin to actively resist turning over responsibility and decision-making to their offspring is due to their escalating fear of:

• powerlessness
• becoming a burden on the family, physically, and financially
• loss of self-worth, self-respect and self-dignity
• abandonment by the family

To make matters worse, since most people wait until a crisis hits before confronting the need to transfer power and control to their children, role reversal is often forced on the parents with little or no discussion.

Impact of role reversal on the child. For the children, it’s the sinking feeling that they need to start taking responsibility for their parents’ lives, physically, financially, and socially. Typically, the shock of responsibility at the “moment of truth” is followed by feelings of inadequacy, embarrassment, and resentment as the plight of their parents comes to dominate their lives.

Unlike another major event in life, childbirth, there are no pre-natal classes on caregiving issues and techniques, there are no baby showers to help with the expense of care giving, and there’s no parent to turn to for advice or just a shoulder to cry on.

As a result, for the child with parental responsibility, the world of role reversal can be a very dark and lonely place. Again, the comparison with the childbirth event is instructive:

• For child care, there are nine months to prepare, the evolution to term is usually predictable and straightforward, and there is a general crowding around of friends to share in the event.

• For parent care, the catalyst is often a sudden, unexpected crisis, the decline is unpredictable and full of unpleasant surprises, and there is almost never any crowding around of friends to share in the event.

Bottom line, the impact of the role reversal process can be very debilitating, for both parent and child.

The Value of Stepping Up

Fortunately, the Other Talk shouldn’t just be about the necessary transactions, such as how to access the key to the safety deposit box which contains a will, a life insurance policy, and a paid-up funeral service receipt.

It should go beyond funeral and burial plans, wills, and donations to science. It needs to delve into the judgments and decisions that need to be made and how your children will impact and be affected by them.

In essence, the Other Talk covers your entire last chapter, which opens on day one of your retirement. This will require some work on your part, both emotionally and rationally, but ultimately will have powerful implications for your family’s remaining time together. It begins with creating in yourself, then sharing with your kids, a tone and attitude that should permeate the discussion:

• You, the parent, are proactively taking the responsibility for empowering and preparing your children for the reversal of roles that will take place.

• You, the parent, embrace the eventual reversal of roles as not giving up power and control, but rather achieving security and freedom.

The conversation then turns to building a mental framework that will allow a smooth transition when the time comes to shift decision-making responsibilities:

1. First, acknowledging the inevitability of the need and the wisdom to transfer decision-making and management of the day-to-day.

2. Second, discussing and establishing ground rules on the potential circumstances or triggers that affect the change of responsibilities on key functions, such as bill paying, driving, living arrangements, money and asset management, and medical decisions.

3. Finally, it culminates in a series of conversations that cover in depth how you would like to deal with four important facts:

Initially, the Other Talk will be uncomfortable for both you and your children but, as the first conversation unfolds and subsequent ones ensue, you all will begin to realize that you are empowering your kids for something that will have far-reaching and ongoing consequences for the rest of their lives.

Because you will change, physically and financially, over time, and your kids’ family structure, assets, and geographic location may change as well, it’s important to review and update the talk every year.

In essence, the Other Talk can have a powerful impact on your children on a number of levels:

1. Coping with and successfully handling some of the difficult challenges that lie ahead for all of you.

2. Creating a new dimension to the family relationship that comes from participating in, rather than suffering through, these difficult issues.

3. Gaining a thorough understanding and actual experience for when they will sit down with their own kids to have the Other Talk.

On the surface, all of this sounds like common sense. But the reality is that powerful, emotional barriers including denial, role reversal, and loss of control preclude many families from ever discussing the subject. What often helps older adults get past these hurdles is for a professional advisor, or a non-family member to broach the need for the other talk. Trusted advisors have the unique opportunity to introduce the wisdom of long-term planning, and focus on how it can positively impact the family relationship. • CSA

Tim Prosch, MBA, is author of The Other Talk: A Guide to Talking to Your Adult Children About the Rest of Your Life, featured in the Washington Post, Wall Street Journal, and other national publications. A marketing professional, he currently focuses on the needs, wants, and challenges of the baby boom generation and end-of-life issues. Contact him at 773-244-1474, or visit www.theothertalk.com.

The Other Talk was recently published in the Winter 2015 edition of the CSA Journal.