As the ACA continues to evolve, it’s wise to stay abreast of any changes that
affect Medicare spending.

The Affordable Care Act has a number of provisions that affect both Medicare and older adults. Those provisions are designed to achieve four major goals:
Most of the provisions in the ACA designed to achieve these goals are ongoing or have already been implemented. It’s worth noting that the law and its provisions cannot reduce traditional Medicare benefits, change eligibility, ration care, or increase premiums,
co-pays, deductibles, and co-insurance.

People on Medicare have the opportunity to receive a free annual wellness visit that includes nine services, an annual health plan, and a five to ten-year schedule for preventive health screenings. In addition, Medicare will cover seventeen preventive services without any out-of-pocket costs. These preventive services have been available since 2011.

Medicare Part D Donut Hole
The donut hole—the coverage gap in Medicare Part D prescription drug benefit—will be closed by 2020. The closure began after the passage of the law in 2010 and is on track to shrink according to the schedule in the chart below: 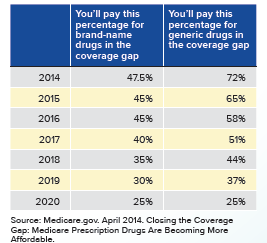 Funding to close the donut hole is provided, at least in part, through Medicare spending reductions achieved through the Affordable Care Act.

Medicare Spending
Prior to the passage of the ACA, the Medicare Part A Trustees Board projected that Medicare would become insolvent in 2016. This means that the program would spend more money than it would receive in revenue. For a program with over forty-nine million beneficiaries, insolvency would have significant implications that could eventually impact both benefits and delivery of services.

As a result, a major focus of the ACA was to extend Medicare’s solvency. And to a large degree, that effort has been successful. The latest projection from the Trustees Board extends Medicare’s solvency through 2030. While this solvency extension is not entirely the result of the ACA, the law’s spending reductions do play a major role.

It’s also important to understand where these spending reductions are targeted as well as the reasons behind them. In 2012, the same year as the CBO estimate, about 32 percent of all Medicare benefit payments went to hospitals, 23 percent was spent on reimbursements to Medicare Advantage (MA) insurance companies, and 19 percent went to physician payments. That means payments to hospitals and Medicare Advantage plans represented almost 60 percent of all Medicare benefit spending.

According to the Congressional Budget Office, Medicare hospital reimbursements will be reduced by about $260 billion between 2013 and 2022.

It is hoped that reduced hospital reimbursement rates will promote greater efficiency and reduce administrative waste without affecting service quality. But whether cuts will negatively affect long-term service quality remains to be seen. However, the most significant impact may be on the financial security of some hospitals. In 2011, CMS projected that 15 percent of hospitals could become unprofitable within a decade.

Another significant part of the law’s spending reductions includes reducing unnecessary hospital readmissions and Medicare waste, fraud, and abuse. Under the ACA, hospitals receive reduced reimbursement payments for “unnecessary” readmissions. Between January 2012 and August 2013, unnecessary readmissions were reduced by 130,000. CMS estimates that these provisions will lower Medicare spending by $8.2 billion between 2010 and 2020. Since 2010, efforts inspired by the ACA to reduce Medicare waste, fraud, and abuse have recovered about $19.2 billion from parties seeking fraudulent payments.

Medicare Advantage reimbursements. The second-largest spending reduction affects Medicare Advantage. Federal reimbursements to private insurance companies offering Medicare Advantage coverage became a focus of ACA spending reductions, not only because of their contribution to overall spending, but also what was viewed as systemic overpayment. Prior to the ACA, MA plans were being reimbursed 14 percent more on average than traditional Medicare fee-for-service plans. That translated into an extra $1,280 per MA enrollee, or $14 billion in higher aggregate payments.

As a result, the ACA reduced MA payments while providing marketing and other incentives for quality improvements. According to the CBO, MA reimbursements will be lowered by an estimated $156 billion between 2013 and 2022. Those spending cuts began in 2012 and are scheduled to end in 2017. MA payments have been reduced, on average, from 114 percent of Medicare fee-for-service in 2009 to 106 percent in 2014.

In reality, that estimate will likely be lower than projected, since planned reimbursement cuts were not made in 2014 and won’t be made in 2015. Instead of a 2.2 percent cut for 2014, MA reimbursements were actually increased by 3.3 percent. For 2015, a scheduled 1.9 percent cut will be changed to a 0.4 percent spending increase. Those changes were based upon lower Medicare spending trends over the next several years.

With one exception, the impact of these provisions on Medicare Advantage coverage has been pretty minimal. According to the Federal Department of Health and Human Services, since passage of the ACA:

The downside for MA policyholders may be the potential impact on provider networks. The biggest overhead cost for insurance companies is the direct cost of health care, and they frequently adjust or reduce their provider networks to better manage costs and profits. UnitedHealth Group, a leading MA plan provider, has reduced its national provider networks by some 30,000 physicians over the last two years. The company’s stated goal is to reduce its networks by 10 to 15 percent over last year.

The Sequester and the latest spending trends. Medicare spending has also been significantly reduced by another law that has nothing to do with the Affordable Care Act. The so-called sequester (mandatory, across-the board spending cuts) created by the Budget Control Act of 2011, implemented a maximum 2 percent cut on all Medicare physician claims submitted after April 1, 2013. The CBO estimates that these sequester-based cuts will reduce Medicare spending by $123 billion between 2013 and 2021.

As it turns out, all of these spending reductions, as well as other factors (such as the enrollment of younger and healthier baby boomers into Medicare’s risk pool), have helped to create the lowest growth rate in Medicare spending in many years. This trend has been so significant that the CBO has lowered its projections for Medicare spending each year since 2010. Medicare spending was expected to be $1,200 lower per beneficiary in 2014 than was projected in 2010 and more than $2,400 lower in 2019. 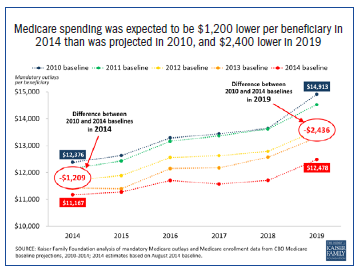 However, this spending trend is not going to last. With the ever-growing aging population in the United States, Medicare spending is sure to increase. At some point in the not too distant future, Medicare will be facing insolvency issues again. At best, the ACA is helping in the short run.

The IPAB and the Elder Justice Act
One of the more controversial provisions of the ACA is the creation of the Independent Payment Advisory Board, (IPAB) a board of experts nominated by the President and approved by the Senate. If Medicare spending growth increased more than a half of a percent above the economy, the board would make recommendations to bring that spending in line. Congress could implement those recommendations or reject and replace them. However, Congress would still have to reduce spending by the targeted amount.
Due to political concerns and the downward trend in overall Medicare spending, the board has not been appointed; it could not convene until spending thresholds have been reached. In the current political climate, it is unlikely that any appointee to the IPAB would be confirmed. As a result, the IPAB has had no impact on Medicare.

Another provision of the law is the Elder Justice Act. The act was designed to reduce elder abuse through funding of adult-protective services at the state level, as well as the development of legal guidelines, national databases, and forensic centers to address elder abuse and neglect. Unfortunately, the act was not funded in the law’s original appropriation and very few of these provisions have received meaningful funding since 2010.

Impact of the Midterm Elections
Since this article was written in November 2014, it’s not entirely clear how the midterm elections will impact the Affordable Care Act. There will be at least one more attempt by the House of Representatives to repeal the entire law, but that is not likely to pass the Senate, since the Democratic minority will likely filibuster the effort. Even if the repeal could pass in the Senate, it would certainly be vetoed by the President. As a result, the law is likely to remain in place through 2016.

Attempts will be made to repeal the medical-device tax, the individual mandate, and provisions of the employer mandate. There will also be attempts to defund specific parts of the ACA and its implementation.

A number of federal court cases and lawsuits may impact the ACA as a whole, but most of these do not specifically affect the provisions of the law that directly apply to Medicare.
In terms of specific legislation, incoming Senate Majority Leader Mitch McConnell and House Speaker John Boehner are clear that the new Congress will attempt to repeal the Independent Payment Advisory Board. Inasmuch as it was never implemented, that repeal would have no immediate impact on Medicare.

The real issue is whether the IPAB will be repealed without being replaced with another alternative. Given the aging baby boom population and higher Medicare utilization in the future, there is no doubt that Medicare spending will significantly increase over time. Even with current spending trends, Medicare is still projected to become insolvent in sixteen years. Clearly, some mechanism to manage Medicare spending will need to be introduced long before then. If the IPAB is simply repealed without some other major Medicare reform or restructuring, we will be forced to confront the problem with an important tool missing from the toolbox. •CSA


Bob Semro is a policy analyst for the Bell Policy Center, a non-partisan, nonprofit research and advocacy organization in Denver, Colorado. He currently serves on the Health Plan Advisory Workgroup for the Colorado Health Benefits Exchange. Contact him at 303-297-0456, ext. 225, or semro@bellpolicy.org.

ACA: A 2014 Update was recently published in the Winter 2015 edition of the CSA Journal.

Posted by Society of Certified Senior Advisors at 1:41 PM