Divorce After 50 Offers Its Own Challenges 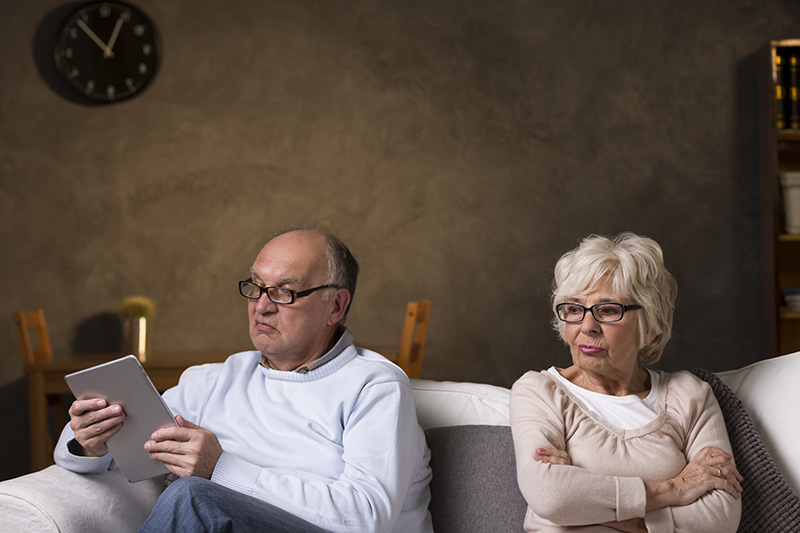 Not only can seniors lose much of their financial assets at a time in life when it may be hard to financially recover, but they can also lose shared connections and memories.

People are often shocked when they hear that a couple who has been married for 20, 30 or 40 years is getting a divorce (like Al and Tipper Gore, who split in 2010 after 40 years of marriage and four children.) The assumption is that if you’ve been together that long, you must have worked out any problems. And yet a study from Bowling Green State University in Ohio in 2014 found that the divorce rate for people 50 and over doubled from 1990 to 2010 and that one in four Americans getting divorced is over 50.

According to AARP, women initiate 60 percent of divorces after age 40. This could reflect the fact that more women are working today and thus have their own income and some independence, as well as a life outside of marriage and family. One therapist opined that women have higher expectations for their emotional life and won’t put up with less. And divorce no longer carries the social stigma it once did.

Readers commenting on an article on “gray divorce” in the Washington Post offered their own opinions:

“As women have become better educated and financially independent, they no longer have to tolerate husbands who don't appreciate them, abuse them, ignore them and try to dominate them.”

“Many men I have known, 50+, married for years, look at their wives, and decide it's time to ‘trade in for a new model.’ The old model gets left with very little.”

“But mostly, I see people who simply don't agree on how they want to live going forward into their senior years. Some want to stay put while their spouse wants to move around a bit. One partner wants to travel, the other doesn't. One partner is sick of cooking and cleaning after 40 years and frankly realizes that being single is the easiest way to get out of most of the drudgery. . . . And more importantly, some couples are simply tired of being tied financially to another person. Having to 'agree' on how and where to spend money can be very draining when there are two different viewpoints on spending it. With joint finances, you never have the freedom to just spend some money the way you would like to.”

A gray divorce brings challenges that you don’t face when younger. A big one is finances. If you’re retired, you can expect to have your nest egg cut in half once you divide property, pensions, IRAs and anything else you own together. At the same time, on less money, you’ll each be supporting your own household instead of sharing expenses. Similarly, you’ll have to split the bills on any debts you owe, such as mortgage, credit cards or car loans. Researchers report that older divorced Americans have only 20 percent as much wealth as older married couples.

For women, this is a bigger issue than for men because women traditionally have made less money than men and live longer. An older generation of women, especially, may have worked part-time or not at all in order to stay home and raise the children. That means they have a smaller pension, 401(k) or IRA, if any, and a smaller Social Security check. However, spouses who have been married for more than 10 years have access to their former spouse’s Social Security payments. In some cases, divorced spouses can get veterans’ benefits.

Other financial concerns include:

Besides the financial issues a gray divorce engenders, there are the emotional ones, as well. If you’ve been married a long time, you and your spouse have a lot of history together. It will be difficult, to say the least, to not look back with bitterness and sadness on those once shared memories. You’ve seen yourself as part of a couple—and others have too--for so long, it will be hard to conceive of yourself as someone apart and alone. Divorce will mean starting all over. Other hardships include:

“Gray divorce can drag both parties into the red,” April 8, 2016, Washington Post.