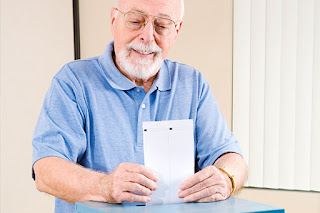 In recent elections, older adults, as a group, are voting more heavily Republican. Will this trend continue? How do Baby Boomers affect this shift?

“Any man who is under 30 and is not a liberal has no heart, and any man who is over 30 and is not a conservative has no brains.” This quote, which has been variously attributed to several people, including Winston Churchill, has been accepted as a truism. When we’re young, we’re more idealistic, more willing to throw caution to the wind and vote for a politician who appeals to our ideals. As seniors, we’re supposed to be wiser, more hard-headed and skeptical, not willing to gamble our lives on radical promises for a rosy future.

Whether this is true or not, one fact that has endured over time is that seniors tend to vote in higher numbers and more faithfully than younger voters. There are several reasons for this, including making sure their Social Security benefits are not tampered with (see sidebar). Yet, despite seniors’ importance in the current presidential election, current candidates are ignoring issues important to older adults.

While the truth turns out to be complicated, evidence from the last few elections shows older adults voting in greater numbers for Republican candidates. The Gallup Poll reported that “U.S seniors—those aged 65 and older—have moved from a reliably Democratic group to a reliably Republican one over the past two decades.” This may represent a significant shift, because seniors had been solidly Democratic from 1992 through 2006, and significantly more Democratic than younger Americans. By comparison, younger Americans, those aged 18 to 64, voted more heavily Democrat from 2006 to 2013 than in previous years. It’s worth keeping in mind that what was considered liberal 50 years ago might be considered conservative today, and vice versa, as political views have shifted over time

However, seniors are not a monolithic group. The oldest of the group, what is known as the Silent Generation, is more likely to be Republican, while Baby Boomers are somewhere in between the Silent Generation and the younger Millennials, who lean toward the Democratic Party. Among Baby Boomers, those born between 1946 and 1964, there are also notable differences. Boomers born in the middle (between 1950 and 1953) tend to vote more Democratic than their cohorts. The middle group came of age during the height of the Vietnam War and the battle for civil and women’s rights, as well as during the free love and drugs hippie era. Meanwhile, the youngest Boomers became adults during an economic downturn and during events that questioned the strength of the U.S. role in the world, such as the Iranian hostage crisis.

Because Baby Boomers constitute 32 percent of the U.S. adult population, they eclipse all other generational groups. But how they will vote in the future is hard to predict. Many of today’s Republican seniors were Democrats in younger years.

Why We’re Democrats or Republicans

We’re a product of our times, and particular events—historic or cultural—shape us. Experts say we choose our political affiliations based on events when we were young, and many remain loyal to the party of their youth. For example, those who grew up during the Great Depression and the Franklin Roosevelt administration tend to keep their Democratic leanings throughout their life. Those who came of age under Eisenhower, a popular Republican president, didn’t abandon their Republican membership, even when the party may have changed. In contrast, Baby Boomers were formed by the Kennedy and Johnson years, both Democrats.

Others say political affiliations are based on our cumulative life experience—our jobs, religion, relationships or life-changing events, such as divorce or serious illness. If we are becoming more conservative as we age, one theory is that older people are more resistant to change. We worry about preserving our money longer, and we slow down while the rest of the world speeds up. Yet some studies have shown people becoming more tolerant and flexible in old age, as we learn from life’s experiences.

Interestingly, race seems to have been a factor in older adults becoming more Republican in the last few elections. While seniors favored the Democratic candidates in the presidential elections from 1992 through 2004, they abandoned the party when Barack Obama ran for president. Seniors favored Bill Clinton in the elections but were the only age group to support the Republican candidate over Barack Obama.

For whatever reason, this conservative trend reflects a shift in the electorate, as well. Seniors are overwhelmingly white, compared to younger generations that comprise different ethnic groups, and whites have become more solidly Republican in recent years. Eighty-five percent of those 65 and older are non-Hispanic whites, according to Gallup estimates, compared with 77 percent of 50- to 64-year-olds, 66 percent of 30- to 49-year-olds, and 54 percent of 18- to 29-year-olds. In all age groups, nonwhites are overwhelmingly Democratic. Nonwhite seniors, in fact, are the most strongly Democratic of any age group.

Despite the fact that seniors are the biggest voting electorate—that is, those people who actually vote—issues around aging such as Medicare, long-term care and Social Security are rarely addressed in the current presidential election. As of this writing, only two candidates, Hillary Clinton and Bernie Sanders, have posted their positions on Social Security on their websites. Aside from Clinton discussing long-term care in early stump speeches, candidates have hardly mentioned this critical issue facing many American families.

In a poll of more than 3,400 Next Avenue readers—mostly 50 and older—about what issues matter to them in this election, 67 percent said aging, caregiving and long-term care will affect how they vote in the presidential election. However, these respondents’ biggest concerns were the economy, healthcare, climate change and foreign policy, and then aging. In other polls of issues crucial to seniors, Medicare, Medicaid and Social Security have ranked high. A Pew survey in 2014 found the clear majority of Americans—61 to 74 percent, depending on age—opposed Social Security cuts.

With the exception of Donald Trump, most current Republican candidates espouse the party’s philosophy of a smaller government role in Social Security. They want to raise the retirement age and privatize retirement, in which workers would have their own personal investment accounts through Wall Street. In addition, this approach would lead to means testing that would reduce benefits to those whose current income or assets exceed specified thresholds. Democrats, notably Bernie Sanders and Hillary Clinton, oppose privatization, a raised retirement age and benefit reductions.

So whether Americans, especially older adults, will vote for a candidate based on their view about Social Security remains to be seen, especially when it’s an issue currently below the radar.

Posted by Society of Certified Senior Advisors at 8:00 AM