Those who are childless may lack the social networks that children and grandchildren provide. For elder orphans, experts say it's important to create a circle of support for aging. 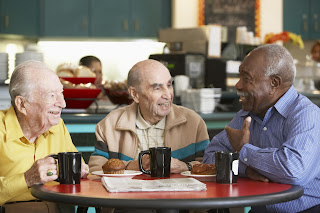 Marcy, 66, is a single professional woman who enjoys her active life—seeing friends, playing tennis and traveling. She has been married and divorced but never had children. Recently, her independent parents were diagnosed with Alzheimer’s, and she has been scrambling to find an assisted living facility, talk to their doctors and convince her parents to move from their apartment. Marcy started thinking about who would take care of her if she were similarly disabled. She is not close with her brother, who lives on the other side of the country, and she barely knows her niece and nephew.

Marcy is part of a growing population known as “solo agers” or “elder orphans”—older adults with no children to care for them as they age. Today, one in five baby boomers has no children, and one-third of adults will enter old age single (widowed, divorced or never married) (from A Place for Mom). The problem is compounded because over the past few decades, parents are having fewer children. So, even those with children may only have one child to depend on, and that adult son or daughter may be unavailable for various reasons.

Family members provide 70 to 80 percent of long-term caregiving, according to a survey by the American College of Financial Services. Without a family, solo agers must create their own ways of coping with old age, especially because 70 percent of those over 65 need long-term service, which includes everything from transportation to more serious care.

As we age, many come to depend on their children for help. It can be in small ways—replacing a light bulb in a ceiling fixture too difficult for aging bodies to reach, running errands or reminding parents of appointments. But there’s also a larger social context. Seniors with children often have bigger social networks than those who are childless, interacting not just with their adult children but with their spouses and kids. Grandparents can enjoy the web of activities that their families are involved in: birthdays, graduations, school plays and sporting events.

Those who are childless may lack these social networks that can provide assistance as well as social engagement. Although childless couples can rely on each other, eventually old age will win out, and one or both couples will need help. A social network is a vital piece of the aging puzzle. Research links physical and emotional well-being to a strong support system, whether that’s family, friends or another community. Isolation, on the other hand, can lead to depression and poor health. For elder orphans, experts say it’s important to create a circle of support for aging.

If you had an emergency, who could you call for help? Start talking to friends about this and see if you can share resources.

Examine what kind of social networks you have: friends, neighbors, religious congregations, book groups, former coworkers, cousins, members of your gym, gardening clubs, etc. It’s important to think about who you would trust and then strengthen those ties. Because many older adults are in the same (childless) boat as you are, it’s a good idea to start conversations now about helping each other when the time comes. If you don’t have a good social network, you can start by reaching out to others.

One community that may be ahead of others in planning for single old age is the lesbian, gay, bisexual and transgender (LGBT) community. Because many LGBTs don’t have children and may have been estranged from their biological families, they have created their own families and communities.

Move to a Community

Many older adults, including those who are single, choose to live in a retirement residence surrounded by others seeking a community of similarly aged individuals. You get to know your fellow residents through shared meals, activities such as trips to the theater or museum, or classes such as yoga or painting. Help can be in the form of a knock on a neighbor’s apartment door (“where are the mailboxes?”) or services offered by the retirement home—such as cleaning or small repairs, or more serious issues, including checking on someone with memory issues. Although retirement communities can be expensive, many cater to lower-income seniors, such as SHAG in Seattle.

Another option for those who want more independence or a home of their own is cohousing (see "Cohousing Provides Community and Independence", Senior Spirit, March 2014). Cohousing consists of a community of people who want to live adjacent to each other and participate in activities together while also having their own place to call home. Members share communal property but own their houses or condos. Cohousing, averaging 20 to 40 units per community, comes in many forms. In multigenerational cohousing, families and residents of all ages, including seniors, inhabit the same communal space. A more recent development is cohousing solely for older adults. However, many cohousing projects are intended for independent adults and are just starting to have a conversation about what happens when one of its members needs more help than just a ride to the grocery store. Other forms of senior communities can be more informal, such as friends buying condos or homes next to each other—close enough to help each other out but still maintaining some independence. Many older adults are setting up their own communities by sharing a house together.

“How to Retire Single Without Being Isolated,” Next Avenue

“Solo Aging: The Next Frontier,” May 21, 2015, Society for Certified Senior Advisors


Posted by Society of Certified Senior Advisors at 3:50 PM