Fighting for Wilderness for 40 years

Vicky Hoover started hiking with her family in the Sierra Nevada Mountains of California in 1967. That experience awoke a passion for nature, and since then she has spent countless hours leading others into the wild, as well as working to save as much wilderness as she can. 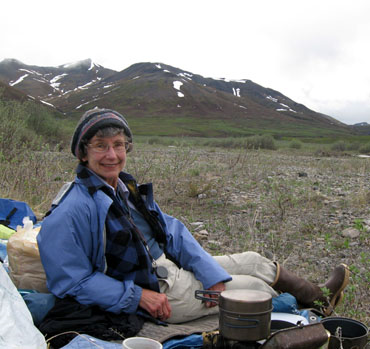 In the late 1960s, Vicky Hoover began leading backpacking trips for the Sierra Club in the Sierra Nevada Mountains of California. Forty years later, after leading countless outings and efforts to save wilderness, she was honored with a Wilderness-Forever Future Award from the Sierra Club.

Born in Manhattan, Vicky found her way to California where she started hiking in the Sierras with her husband and young children in 1967. Soon, she and her husband Bill were climbing peaks and leading Sierra Club outings, starting with family-oriented burro trips. By 1981, she had climbed all 247 peaks in the Sierras, but soon extended her love of wilderness to Alaska, Utah and New Zealand.

Vicky’s training as a wilderness advocate began in 1985 when she moved to San Francisco and took a part-time job at the Sierra Club office, where she learned the basics of wilderness politics, grassroots organizing and effective lobbying. She started out mobilizing people in the lower 48 states to support wilderness protection in Alaska, particularly the Arctic, and later worked to help pass the California Desert Protection Act, which designated 69 wilderness areas and created Death Valley and Joshua Tree national parks as well as the Mojave National Preserve. Her efforts succeeded in getting 14 counties to pass resolutions in favor of the bill. “Fourteen out of 58 may not seem like a lot,” she said, “but they were the counties with the majority of the population. They were the ones that counted” (from Great Old Broads for Wilderness).

In the mid-1990s, Vicky worked to defeat the Utah Public Lands Management Act, viewed by many as an anti-wilderness bill. Her role was to set up volunteer phone banks, and the bill was defeated in 1996. After that success, she started the Sierra Club’s California/Nevada Regional Wilderness Committee, monitoring upcoming legislation for wilderness and new threats and management issues on already designated lands.

In the wilderness excursions she leads, Vicky teaches participants about wilderness issues and advocacy, often involving some kind of service, such as removing invasive Russian olive trees near Utah’s Escalante River or building barriers in Nevada to protect wildlands from off-road vehicles.

As a wilderness advocate, she has worked methodically over months and years, building relationships with sympathetic federal agencies and legislative staff. Of her ability to stay committed over long periods of time, never appearing to get discouraged, Vicky says, “I don’t think of it as dedicating myself to a cause; the cause is not separate from me—it’s part of my life. It’s what I am” (from The Yodeler ).


Fighting for Wilderness for 40 years was featured in the December 2014 Senior Spirit newsletter.

www.csa.us
Posted by Society of Certified Senior Advisors at 9:22 AM