Heartburn Can Be More Serious Than Discomfort 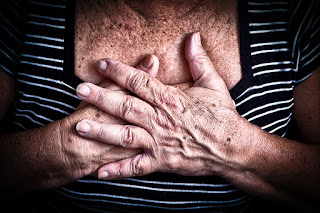 Older adults are especially susceptible to extreme forms of acid reflux, which can harm the esophagus and cause problems eating and drinking.

More than 60 million Americans experience heartburn at least once a month, and some studies have suggested that more than 15 million Americans experience heartburn symptoms, also known as acid reflux, each day (American College of Gastroenterology). Because of physiological changes, plus prescription medications that affect the GI tract, older adults are more likely to suffer from a more serious form of acid reflux known as gastroesophageal reflux disease, or GERD.

So, there’s a good reason why your bathroom shelves are loaded with bottles of Pepcid, Gaviscon, Tagamet and Maalox, and why you’ve had to stop eating some of your favorite dishes, like burritos and spaghetti with marina sauce.

You experience heartburn as a burning pain in your chest, just behind your breastbone (and not actually in your heart), often after you eat or at night. The pain is usually worse when you are lying down or bending over. It’s known as acid reflux because stomach acid backs up into your esophagus (the tube that transports food from your mouth to your stomach). In a healthy esophagus, after food and liquid flow into your stomach, the esophageal muscle tightens. But if it’s weak, a trait common in older adults, the acid can come back up and cause a burning sensation.

On its own, acid reflux can cause extreme discomfort, which over-the-counter medications can often alleviate. Perhaps surprisingly, stomach acid can corrode the enamel on your teeth, leading to cavities. However, acid reflux can become more serious and turn into GERD. As such, it can irritate the lining of the esophagus (esophagitis), which can lead to painful swallowing. GERD can also cause ulcers and scar the esophageal lining, which narrows the esophagus and makes it more difficult to eat and drink. In a few cases, the disease can even increase your chances of cancer. To figure out if you have more than heartburn, see the sidebar, “Determine if you have GERD.”

Various factors can trigger heartburn. One is a hiatal hernia, which is when the muscle wall separating your stomach from your chest moves up, allowing acid to enter your esophagus. Also, many older adults take blood pressure medications which can cause heartburn. Numerous lifestyle practices also contribute, including:

Many over-the-counter medications can help relieve acid reflux. The options include:

One study reviewed data from 16 million clinical documents and found that people who take PPIs have a greater risk of suffering a heart attack, regardless of whether they have a history of cardiovascular disease (Pharmaceutical Journal).

Another study linked PPI to increased risk of developing kidney disease (Medline Plus). The findings are based on medical records from over 173,000 VA patients who were prescribed a PPI and more than 20,000 other patients given H2 blockers. Over five years, 15 percent of PPI users were diagnosed with chronic kidney disease, versus 11 percent of those on H2-blockers. After the researchers weighed other factors, PPI users still had a 28 percent greater risk.

PPIs work by blocking production of stomach acid, which helps digest food and acts as a barrier against certain pathogens. Without the stomach acid, people are more vulnerable to nutritional deficiencies and infections, according to one researcher, because you’re not getting the vitamins, minerals and other nutrients you need. Nutrient deficiencies and bone-density loss is especially a concern for older adults.

Another recent study raises concerns about PPIs causing dementia. The German Center for Neurodegenerative Diseases in Bonn studied 73,679 people ages 75 and older. The researchers found regular PPI users had at least a 44 percent increased risk of dementia compared with those not using the drugs (NPR). Although it’s not clear how PPIs might increase the risk for dementia, other researchers studying mice have reported that PPIs seem to increase levels of beta-amyloid, a damaging protein that accumulates in dementia patients’ brains.

None of these studies prove that PPIs are directly to blame for these problems, only that there is a link. However, medical experts advise that patients should only take them when their acid reflux or GERD is severe. Many prescribers are having their patients taper off of them periodically or switch to other H2 blockers or antacids. Instead of relying only on drugs, people with acid reflux/GERD should consider diet and lifestyle changes, such as eating less spicy foods and losing weight, experts advise. To relieve the discomfort of acid reflux, you can also raise the head of your bed.

Blog posting provided by the Society of Certified Senior Advisors

Posted by Society of Certified Senior Advisors at 9:20 AM