The risks of a hospital stay now include delirium, which can increase cognitive problems, the length of a hospital stay and even the likelihood of death. Hospitals are starting to become aware of the problem and are taking measures to prevent this costly and harmful condition. 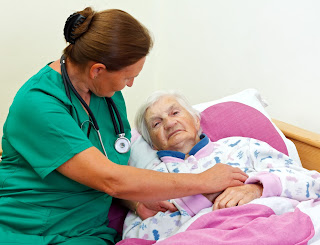 Many people going into the hospital for surgery worry about physical complications from the procedure. However, new research reveals that the mental consequences can be worse. For older hospital patients who have had surgery, delirium is the most common complication of hospital admission (BMJ).

Delirium seriously affects mental abilities and causes confused thinking and reduced awareness of your environment. The condition can develop quickly (as opposed to dementia’s slow onset) and is usually  the result of a severe or chronic medical illness, changes in your metabolic balance (such as low sodium), medication, infection, surgery, or alcohol or drug withdrawal (from the Mayo Clinic).

Studies of patients with delirium reported a twofold increase in death after hospital discharge, an average eight-day-longer hospital stay and worse physical and cognitive recovery linked to increased time in institutional care.

People with delirium report terrifying hallucinations and flashbacks. After the fact, they complain they can’t balance their checkbooks, can’t find their cars in the parking lot and sometimes can no longer work. Almost worse, because delirium is not usually recognized as a byproduct of hospital surgery, many who are affected don’t know what’s happening to them.

Delirium affects 7 million hospitalized Americans annually, according to the American Delirium Society. It’s estimated to cost more than $143 billion annually, mostly due to longer hospital stays and follow-up care in nursing homes (National Center for Biotechnology Information.) Because delirium is an expensive problem, a few hospitals are starting to implement ways to prevent it.

“Medical schools are now training the new generation about delirium’s dangers, but there are thousands of doctors in the older generation who don’t know how to recognize it or know that 30 to 40 percent of it could be prevented,” said geriatrician Sharon Inouye, who started a program to help hospitals prevent delirium (see sidebar). “We could solve our whole Medicare crisis by preventing delirium,” by saving money that now goes to paying for complications from delirium (quoted in New Old Age).

Hospital delirium is especially common among older people who have had surgeries, such as hip replacement or heart surgery, or those in intensive care. Anything that interferes with neurotransmitters—the brain chemicals that communicate between nerve cells—can trigger delirium, including depression, drugs that affect mental activity or preexisting cognitive impairment. Delirium can also result from the hospital stay itself, which can be disorienting, with its sleep and noise interruptions, disruption of usual routines and spending long stretches alone in unfamiliar surroundings.

Hospital delirium is not new, but in the past, healthcare workers have chalked it up to old age, even when those who show signs of the condition have not been diagnosed with dementia. However, folks with dementia are at increased risk of developing delirium.

Delirium’s cause is a combination of underlying risk factors that interact with stressors in the hospital environment. Drugs are an important risk factor and may be the sole cause for 12 to 39 percent of delirium cases (BMJ). The list includes sedatives, sleeping pills, narcotic painkillers and some allergy, blood pressure and incontinence drugs.

Patients in intensive care units who are heavily sedated and on ventilators are particularly susceptible to delirium; some studies place the rate as high as 85 percent. But even something as easily treatable as a urinary tract infection can cause delirium. Also, a longer hospital stay increases your risk of delirium.

The short-term effects of delirium can range from hallucinations, aggression and belligerence to sleepiness and lethargy. Delirious patients are confused about what is happening around them, say things that don’t make sense or believe people are trying to harm them. Their personalities can change—becoming quiet and withdrawn or anxious.
Those who suffer from hospital delirium must then get more care in expensive nursing-care facilities, which is one reason for delirium’s high costs.

Delirium’s effects can linger for weeks and months. One-quarter of patients over 70 with delirium do not return to their baseline cognition within three months. In the long term, delirium can cause permanent damage to cognitive ability and is associated with an increased need for long-term nursing care. It also leads to complications, such as pneumonia or blood clots, that weaken patients.

The good news is that, with more awareness, many delirium cases are preventable. Some hospitals are more carefully using medications known to make delirium worse and are trying to wean ICU patients off breathing machines sooner. Because the practice of physically restraining agitated seniors has been shown to sometimes worsen delirium, a few hospitals are limiting the use of restraints, as well as getting patients out of bed sooner so they can move.

Research is showing that providing as normal an environment as possible goes a long way toward preventing delirium. That means adhering to the typical patterns of day and night, such as shutting off lights in patients’ rooms at night, making sure patients have their eyeglasses and hearing aids so they are aware of their surroundings, and minimizing noisy alarms. Having family and friends visit often helps establish an atmosphere of normalcy. Harvard researchers recently led a meta-analysis showing that these types of non-drug interventions reduced delirium by 53 percent (Next Avenue).

One early pioneer in trying to prevent delirium was Dr. Fred Rubin, who in the 1990s tried various strategies to prevent elderly patients from developing hospital delirium. As a geriatrician and medicine service chief at University of Pittsburgh Medical Center’s Shadyside Hospital, Rubin made sure clocks and calendars were visible from patients' beds and that window shades remained open during the day. Trained volunteers talked with patients, asked what day it was, replaced hearing aid batteries, engaged patients in puzzles or word searches, helped at mealtimes and, using newspapers or iPads, discussed the day’s events.

During a 14-year span, the hospital's delirium rate dropped from 41 to 19 percent and saved $7.3 million a year, including revenue generated from additional available beds and variable cost savings (Modern Healthcare).


If you or a loved one are preparing for a hospital stay, try to choose a facility using the HELP program (see sidebar) or with an Acute Care for Elders unit. Family members, visitors and staff should watch for signs of sudden changes in memory, impaired attention, confused thinking, and hallucinations. Delirium is a medical emergency, best managed through prevention, early detection, and rapid intervention.

Another Hospital Hazard for the Elderly, Nov. 2, 2011, New York Times

Delirium a Serious Threat for Older Hospital Patients is a featured article in the January 2016 Senior Spirit newsletter.